Alright. So we essentially completed our review of the second part of verse 6, and we concluded from part 3 that it says…

2 Corinthians 9:6 –…and he who sows on the basis of blessings will also reap blessings.

It is now time to turn to the first part…

2 Corinthians 9:6 – He who sows sparingly will also reap sparingly…
Interestingly, this part does not suffer from any of the two issues we identified in the second, namely, the poor translation of a word and the outright omission of another. But what we will argue is that the issue at a hand is simply a matter of interpretation of the adverb “sparingly”.

Sparingly…what means thou?
The Greek word for “sparingly” is pheidomenós and it comes from the verb pheidomai which means to spare, or to abstain. A search of this adverb in Merriam-Webster dictionary gives sparing, which is the act of giving or sharing as little as possible. It also refers to less plentiful than what is normal, necessary, or desirable. There is certainly a strong reference to quantity in this definition, and that is precisely how it is mostly understood in verse 6.

But there is something rather peculiar about sparingly. It turns out that 2 Corinthians 9:6  is the only place in the New Testament where the word pheidomenós is used. The implications of this fact is that there are essentially two options when it comes to defining this term. The first is to work with a secular dictionary such Merriam-Webster’s. The second is to stay right here in this verse and explain it from here. We are of the belief that the best option is to stay right here, in this verse.  So here we go!

A little bit of Set theory from Mathematics, shall we!? 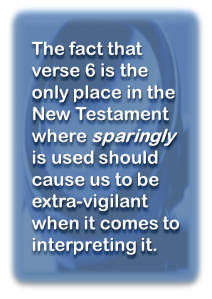 IF we agree that verse 6 is
1) made of two distinct statements (one about sowing sparingly and the other about sowing on the basis on blessings), and that
2) these two statements are mutually exclusive (meaning that both cannot happen at the same time, i.e. one cannot sow sparingly and at the same time sow on the basis of blessings…it has to be one or the other), and that
3) these two statements are exhaustive (meaning that there is no other way to sow but these two ways)

THEN we can only conclude that,
The two statements of verse 6 are the exact opposite of each other.

The implication of this seemingly obvious conclusion is actually quite profound. The implication is that understanding of one of the two statements automatically leads to understanding the other. From part 3, the second part of verse 6 is quite clear… and he who sows on the basis of blessings will also reap blessings. Could not be clearer! Now, if we agree that the first part of the verse is the exact opposite of the second, then the first part must mean… he who “does not” sow on the basis of blessings will reap “something else” than blessings.

So what does that all mean?
The whole purpose of verse 6 is to state God’s perspective regarding giving. There are only two ways to give: either one gives 1) for the “sole” and “unique” purpose of blessing someone else or one gives 2) for “any other” reason than simply blessing someone else. Please note that the opposite of “on the basis of blessing” is any other reason than to bless.  “On the basis of cursing” certainly falls in that category, but so does “on the basis of money”, “…of fame”, “… of greed”, “…of praise”, “…of obligation”, “…of constraint”, etc.

Just like “on the basis of blessings”, “sparingly” refers to the intention behind the giving, not the quantity given. But the intention in this case is any intention other than just blessing the other.

The argument in this article is that sparingly is nothing more than the opposite of on the basis of blessing. And because of it, understanding it properly should really not be a problem. The problem is that this simple understanding gets completely obscured when the second part of verse 6 is not properly translated in the first place.

In addition, the fact that verse 6 is the only place in the New Testament where this adverb is used should cause us to be extra-vigilant when it comes to interpreting it. The argument postulated is that because of it, the best place for its interpretation should be this very verse – which is the immediate context of its use – rather than some secular source. And this allowed us to conclude that sparingly refers to the motivation behind the giving, to the exact same extent that on the basis of blessing does.

Yet, one may ask…“But what if, despite all the arguments presented in this series, there is still room for the notion of quantity in verse 6?”. Could we be wrong all the way in believing that motivation is the one and only focus? We shall investigate that route in the next article. Indeed…“Suppose these terms really refer to quantity…”.

CORONAVIRUS: IT IS NOT ENOUGH TO CLAIM GOD’S PROMISES

Believing and Suffering for Christ

The Hunger of Doing God’s Will

No Prosperity Despite Your Prayers

What’s the Use Anyway?

No Confidence in the Flesh

Burning Out in Search of Your Purpose

The Gift of Repentance