Matthew 6:33 – But seek ye first the kingdom of God, and his righteousness; and all these things shall be added unto you.

If we are honest with ourselves, most of us have wrestled at least at some point with the question: How do I seek God first? Or How do I put God first in my life? For some, the answer is to make sure that the first action they take in the morning when they wake up is to pray, meditate, read the Bible or something of that nature…in other words, putting God first is putting Him first in the day (after all, Jesus Himself did that). For others, it means that before taking any decision, they lift the situation to God first (most likely in prayer). They are then peaceful in taking their decision simply because they “consulted” with God first, even though they may have not gotten an answer from Him (I am certainly guilty of that). Yet for others, it means never missing Church on Sunday, no matter what.
The reality is that if you ask 10,000 Christians what it means to seek God first, you will get 10,000 answers. And this fact is most certainly a clear indication of a serious problem. I will argue that how Matthew 6:33 is typically interpreted is the very source of much of the troubles those who want to serve God face in life. I will argue that Matthew 6:33 is not saying that God’s kingdom and His righteousness is the “first” thing we should seek, but that instead it is “the only thing” we should seek. And there is a “BIG” difference between these two interpretations.

The answer lies in Matthew 6:33 itself 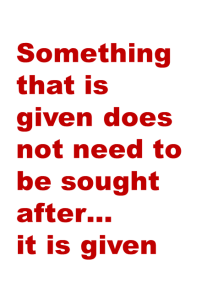 By stating that we should seek “first” the kingdom of God and his righteousness, it seems that Jesus is permitting us to seek other things as well, as long as the first thing we seek is God’s kingdom and righteousness. Indeed, if there is something to be sought “first”, then logic demands that, at least, there must be something to be sought “second”. And this understanding is arguably the most prevalent for most of us Christians. But isn’t this understanding flawed?
Look again at this verse. What is the result of seeking God’s kingdom and righteousness first? “All these things will absolutely (that is what “shall” means) be added unto us”. What things? The things listed throughout Matthew 6, which are everything us, human beings, typically seek in life: “what we shall eat, what we shall drink, what we shall put on”. So the obvious question is this: If “every” imaginable natural need we seek to satisfy in life will be “given” to us, what else is there to seek? Obviously nothing! Because something that is given does not need to be sought after…it is given. We see therefore that although Matthew 6:33 states “Seek ye first”, it actually gives no room for something else to be sought after.

The example of King Solomon: King Solomon became the wisest and richest man to ever live, and 2 Chronicles 1: 7-12 records how this came to be.

2 Chronicles 1: 7-12 – In that night did God appear unto Solomon, and said unto him, Ask what I shall give thee. 8 And Solomon said unto God, …10 Give me now wisdom and knowledge, that I may go out and come in before this people: for who can judge this thy people, that is so great? 11 And God said to Solomon, Because this was in thine heart, and thou hast not asked riches, wealth, or honour, nor the life of thine enemies, neither yet hast asked long life; but hast asked wisdom and knowledge for thyself, that thou mayest judge my people, over whom I have made thee king: 12 Wisdom and knowledge is granted unto thee; and I will give thee riches, and wealth, and honour, such as none of the kings have had that have been before thee, neither shall there any after thee have the like.

Note that God was very pleased with King Solomon for two specific reasons: 1) he did not ask for any riches, etc. for himself and 2) his “sole” focus was on God’s business, His people! We shall see that most likely this is the very same thing Jesus is requiring of us in Matthew, that we forget ourselves and that instead we focus on God’s business. Now we know King Solomon indeed became “very” rich. But did he do anything in particular to become rich? Of course not! Wealth was “given” to Him by God. That does not mean that he did not sign treaties or negotiated whenever the opportunities presented themselves. But those opportunities should be understood as the fulfillment of the promise of God. Solomon had nothing to do with them per say! He became rich because God had promised that He will make him rich. I believe in Matthew, we are exhorted, commanded to have the same kind of “undivided” focus toward God’s business. After all, isn’t that the first commandment?

The parallel record of Luke 12:31: It is interesting to note that Luke 12:31, which conveys essentially the same message as Matthew 6:33, does not include the word “first”.

Luke 12:31 – But rather seek ye the kingdom of God; and all these things shall be added unto you.

Compared to Matthew 6:33, Luke 12:31 has two notable omissions: the word “first” and the word “righteousness”. Why “righteousness” is not mentioned here is, I am sure, an entirely different topic, which is well beyond the scope of this article. However, that the word “first” is not mentioned here is particularly noteworthy for this study. In Luke, Jesus tells us simply to “seek the kingdom of God”. And from this record, it is rather evident that the kingdom of God is the only thing to be sought, since just as in Matthew, “everything” else will be added to us as we do so.

Some words of Wisdom: This is what King Solomon has to say, the man to whom God gave wisdom like to no other.

Ecclesiastes 12:13 – Let us hear the conclusion of the whole matter: Fear God, and keep his commandments: for this is the “whole” duty of man.

To fear (or respect with reverence) God and to keep His commandments is the “whole” duty of man. There is nothing else that man is supposed to be doing other than respecting God and do His commandments. There clearly is perfect harmony between what King Solomon is saying and the position we are proposing here that the “only” thing man is to seek is the kingdom of God and His righteousness.

So there are really two questions that come to mind: The first is how should we understand the word “first” in Matthew 6:33, since there is no indication that this word was added by bible translators as it is sometimes the case. The second is what are the implications of what we argued in this article? We address these in part 2.

Processing…
Success! You're on the list.
Whoops! There was an error and we couldn't process your subscription. Please reload the page and try again.