The second of the three illustrations Jesus-Christ gave is noteworthy because it is the only one in which He states the correct way after portraying just how wrong the scribes and pharisees were in their practice. This article focuses on that correction, and specifically on the structure of the statements it is made of. There seems to be at least two concepts being called on in this verse: Order and Sanctification, which we believe are important because at the very least, they bring further evidence that Matthew 23:23 has most likely been mistranslated.

Matthew 23:23 – Woe unto you, scribes and Pharisees, hypocrites! for ye pay tithe of mint and anise and cummin, and have omitted the weightier matters of the law, judgment, mercy, and faith: these ought ye to have done, and not to leave the other undone.

In short, as we argued in our primer to this series, we find it hard to believe that, at the end of this verse, Jesus-Christ said to the scribes and Pharisees “…and make sure you keep tithing” as it is often claimed. Our initial suspicion stemmed from the the fact that one of the Greek words (kakeinos) was made to have a completely different meaning in this verse (and in its counterpart Luke 11:42) than in all the other places it is used in the New Testament (all 20 of them).

We shall see that order and sanctification bring another unique perspective on the practice of tithing: that its worth is relative (i.e. that its worth is exclusively dependent on something else). Sanctification is essentially the principle of setting something apart from the rest. And in a biblical context it often refers to making something clean, acceptable to God. God’s children, for example, are sanctified by the blood of Jesus (Hebrews 13:12). Order sets precedence and implies unidirectional dependency, which simply states that object B depends on object A, but Object A does not depend on object B.

The first segment sets the Order

Let us realize that our Lord says “…cleanse first that which is within the cup“. This statement sets a specific order. Cleansing that which is withing the cup “is” the priority, as this should be performed “first”. This clearly establishes a strong dependency between the inside and the outside. The outside and the inside are NOT independent. Furthermore, the Lord tells us that this dependency is unidirectional. 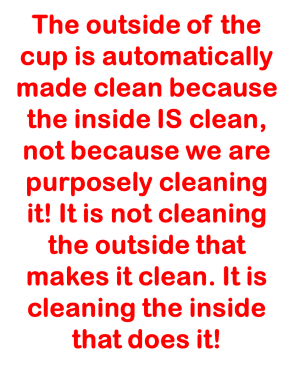 It is the outside of the cup which depends on the inside. The inside however, does not depend on the outside, since it comes first. And if you believe, like us, that precision is key in interpreting the scriptures, then you will notice that there is actually a double emphasis on this directional dependency, because of the concept of sanctification.

The second segment speaks of Sanctification

Remembering our context, cleansing that which is withing the cup is the act of practicing judgment, mercy and faith.  But what is truly intriguing to us is the structure of the second half of the verse. Note that our Lord did not say “cleanse first…, and then cleanse the outside also”. He said, “cleanse first…, that the outside of them may be clean also”. In this context, the state of the outside is how we practice our tithe. According to our Lord, the outside is automatically made clean because the inside IS clean, not because we are purposely cleaning it! It is not cleaning the outside that makes it clean. It is cleaning the inside that does it! How profound! Frankly, we believe there is even more to it that we think we understand. But one thing is sure…It is the cleanness of the inside of the cup which makes even the dirty-looking cup (on the outside) worthwhile. In other words, the outside of the cup is sanctified (made clean, made acceptable) by the inside. Matter of fact, wasn’t this the very reason you found the cold fresh water served in a dirty-looking glass acceptable? Literally speaking, the cup was still dirty outside…we did not clean it once it was handed to us. But we stopped paying attention to how dirty it was because we realize that inside it contained the freshest water! All of the sudden, to us who were really thirsty, the cup no longer looked dirty…it was sanctified by the water inside!

Interestingly, Jesus taught specifically on this concept of sanctification in the immediate context preceding the pivotal verse of Matthew 23:23 we are studying. And we believe that teaching carried into what He subsequently said about tithing.

The worth of the gift placed upon the altar is precisely the fact that it is “on” the altar. We believe it is the exact same logic our Lord used to teach us on tithing: the worth of our tithe – the outside of our cup – is precisely based on the fact that we practice judgment, mercy, and faith in our everyday lives. These are the things that actually matter, without which our tithe is completely worthless.

It is that quality of life as God defines it that makes our gift of tithing such a pleasant gift. Just like the temple and the altar, it is the weightier matters of the law we should be concerned about. Just like the gift is pointless without the altar, or the gold without the temple, tithing is pointless without first practicing the more important matters of the Law. And in fact, it is very deceiving when we practice it this way.

However, the deeper implication of sanctification is that even if for some reason we were not able to make that tithe – this is our cup being somewhat dirty – our offer will still be accepted because it will be sanctified – rendered acceptable – by us practicing faith, judgment and mercy. Sanctification requires at least two elements in order to take place: The object being sanctified and the object sanctifying. And the object sanctifying has to be greater than the object being sanctified otherwise it cannot sanctify it. Think of the blood of Jesus-Christ. God’s children are sanctified by the blood of Jesus. Because His blood is greater than man, it can sanctify man. Man is a sinner, yet He is washed, cleaned, rendered acceptable to God by the blood of Christ. It is not by his own works that he is saved. Isn’t this precisely the meaning of being saved by Grace and not by works? Does not the scriptures call us foolish when we seek to attain salvation by works (Galatians 3:1-3)?

It is time to reason

Back in the Old testament, the dirty-looking cup was the tithe of the people who were not observing it strictly, as opposed to scribes and Pharisees who could not be more perfect at it. This teaching of Jesus-Christ must have been a true breath of fresh air for some of the people of the day, because He was essentially saying that they were actually “Ok” with God if they were practicing judgment, mercy and faith, although they were not perfect in their tithing. How much more do you suppose this is true today? We may be poor, late on bills, drowned in debt! How my people, how on earth can one give a tithe when he has nothing? Have you realized that while we may not be able to tithe because of financial circumstances, we can always practice faith, judgment and mercy? Isn’t this fact the very fingerprint of the masterful design of our God, that those things which happen to truly matter to Him are the ones for which there is absolutely no circumstance on this earth that can prevent us from practicing them? Under what circumstance is it impossible to practice faith? Under what circumstance is it impossible to be merciful? Under what circumstance is it impossible to practice justice? Yes, the world would like us to believe that in some cases, they are impossible to practice. And we are certainly not saying here that they are always easy to practice. It is difficult to be merciful sometimes. And sometimes it is difficult to keep our faith (that is why we ought to intercede for each other). But it is a lie to state that there are cases when we cannot practice them. On the other hand – and in stark contrast – it is easy to find a situation where one cannot tithe: No income, that’s simple!

But here lies the greatness of God: How is it possible to practice faith, judgment and mercy, without giving? Our conjecture is that this is precisely what our Lord was saying in Matthew 23:26…cleanse the inside and behold the outside is clean too! Tithing is a form of giving. Giving is the far larger subject of tithing. As we focus on acting on faith, being fair in our judgment and being merciful to our neighbor, we will find ourselves giving without even trying. Let’s not get caught in religion! No practice of tithing, no matter how faithful it is, will ever serve as substitute for practicing the weightier matters of the Law. The cherry on the cake only makes senses when the cake is present and is good. A cherry on nothing, or worse, a cherry on a rotten cake does the exact opposite of what a cherry is supposed to do. Oh how wonderful is our God, for His ways are far above our ways! In our conclusion in part 4, we shall reflect on these things we saw so far, and shall return to the pivotal statement of Matthew 23:23, looking at what we believe it is really saying. May the very God of peace sanctify us wholly; and may our whole spirit and soul and body be preserved blameless unto the coming of our Lord Jesus Christ. Amen.

Processing…
Success! You're on the list.
Whoops! There was an error and we couldn't process your subscription. Please reload the page and try again.